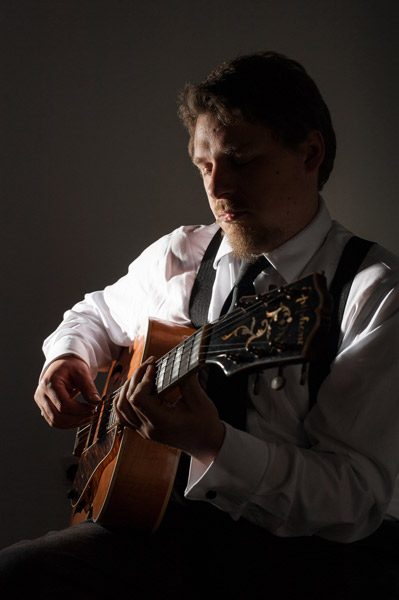 Sam Barker is a composer, recording artist & virtuosic guitarist. Sam was born in Hampshire, England and has lived in Ireland since 1987. He studied for his BMus in CIT Cork School of Music (CSM) taking various composition electives under David Wallace, C.S.L. Parker and Seamus De Barra and orchestration under Alan Cutts. In 2011 he achieved his MA in composition in CSM under C.S.L. Parker.

His output as a composer and performer has seen great stylistic variety from his early modal folk-influenced compositions to his constructionist pieces of the last few years.

His works have been performed nationwide by the Cork New Music Ensemble, (to which he is a regular contributor), Alex Petcu, the Diversus Guitar Ensemble and by himself as performer.

Sam is a versatile performer who can play authentically in a variety of styles such as Jazz, Gypsy Jazz, Classical, Folk, Trad, Blues and acoustic finger-style guitar.

Sam is a registered composer with the Contemporary Music Centre.

The Sam Barker Ensemble performs primarily as a trio. However after years of organising gigs in Cork Sam has come into contact with some of Cork’s (if not the country’s) most talented players. With quality being of paramount importance Sam regularly hires from both CIT Cork School of Music and UCC music department instrumental teaching staff as well as from a host of other regularly working, gigging and active musicians.

This allows for a wide range of musical styles to be performed, from the high energy 1930s gypsy swing of Django Reinhardt and Stephane Grappelli, to jazz  classics like ‘Fever’, and unique takes on more contemporary music, such as Declan O’Rourke’s ‘Galileo’.

Our main aim is to create a vibrant and sophisticated atmosphere. We are acutely aware of volume levels and adapt according to demand until we find the perfect balance: ideal for both those who want to listen intently and those who prefer to relax, chat and soak up the atmosphere. The music is mostly lively, high-spirited swing tunes, balanced by some slower more romantic pieces.